The 2013 annual conference of the International Communication Association (ICA) was held in London, United Kingdom, between June 17 and 21.

This year, the KACA paper session was more competitive than ever. A total of 15 completed papers were submitted, and through a double-blind review process nine papers were selected for presentation. Since two presenters could not attend the session, the following seven papers were presented in a high-density format in concise 7-8 minute presentations.

Sujin Choi at Kookmin University presented “Social-Media-Based Public Forums: How Does the Information Flow?” This submission earned a top paper award and was acknowledged at the KACA reception with a $100 cash prize.

Keith Scott at the Academy of Korean Studiespresented “The Multitude and the Changing Face of Korean Democracy: The 2008 Candlelight Protests and Swarm Intelligence.”

Seyeon Keum (NHN Search Marketing Corporation) presented “They Do, but I Don’t: AIDS Stigma Gap, Its Causes and Consequences.” Co-authors: Byoungkwan Lee and Hyun Ou Lee (both at Hanyang U)

The mentoring session was unique this year because two panelists from US universities and two from Korean universities were invited to talk about job markets and hiring trends in both countries. This unique format was adopted to reflect the recent trend of Korean universities striving to be globally competitive by aggressively recruiting foreign PhDs and/or those who have experiences teaching and researching overseas.

Drs. Hye-Ryeon Lee (U of Hawaii-Manoa) and Hanna Park (Middle Tennessee State U) served as panelists to talk about the US job market, while Drs. Yong-Chan Kim (Yonsei U) and Minsun Shim (Inha U) talked about the Korean job market. They shared their own experiences as job candidates or administrators and gave advice about what job candidates should and should not do. This session had an unusually high turnout—standing room only, even overflowing into the outside hallway. Notable attendees included the following: Carlin Romano, a U of Pennsylvania Annenberg School professor and special contributor to The Chronicle of higher Education; Dr. Kyu Ho Youm, a professor at U of Oregon and the current President of the Association for Education in Journalism and Mass Communication (AEJMC); and several professors from major universities in the US and Korea. Once the session ended, these attendees met with graduate students to provide advice and share experiences and opinions about hiring trends.

This year’s KACA reception was co-sponsored by the Nam Center for Korean Studies at University of Michigan, currently directed by Dr. Nojin Kwak. Following the KACA-ICA Vice President’s opening statement and Dr. Kwak’s introduction about the Nam Center, a few announcements were made regarding the ICA-KACA best paper award, the 2013 KACA graduate student award, and the 2013 KACA election. Even though the room was undersized and poorly ventilated, about 70 people participated in the reception to share information and converse with one another.

Overall, the 2013 ICA-KACA events were a huge success, which would have not been possible without all the Korean and Korean American scholars’ interest and active involvement as presenters, mentors, panelists, and attendees. KACA appreciates their efforts and congratulates their continued success and presence at ICA events. In 2014, the ICA conference will be held in Seattle, Washington between May 22 and 26. KACA looks forward to seeing and interacting with many Korean and Korean American scholars in Seattle! 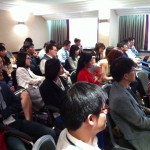 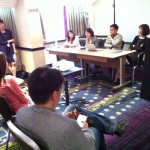 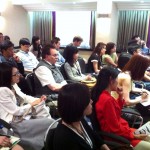 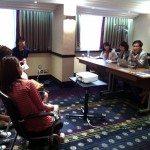 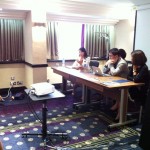 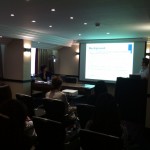 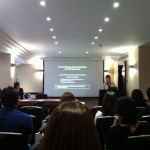